The Tiffany Biergarten began as the Hotel Goetz in 1904, when the Saginaw Valley was quite a lumbering center. Frankenmuth was one of the leading lumbering communities in the county during this time. Travelers and salesmen would come to show their wares to local residents. In fact, people from nearby communities would journey to Frankenmuth to buy and sell goods as well. The hotel treated their guests very well providing them a stall for their horse, overnight lodging and two meals for only seventy-five cents!

In 1926, Hotel Goetz was sold to Henry Fischer and renamed the Fischer Hotel. In the early 1940’s, the hotel was again sold, this time to the McNiven family. The Zehnder family bought the building in 1963, remodeled it, and renamed the business Tiffany Biergarten.

Some may wonder, “Who was Tiffany?” Tiffany was a man, Louis Comfort by name, who lived from 1848 to 1933. Tiffany is also a “favrile” glass of unusual beauty and color which possesses refractive powers capable of iridescent effects. Comfort stencil, an American artist traveled extensively in Europe and painted in oil and watercolor, but eventually devoted himself to decorative glass work. The multi colored beauties hanging in the fine turn of the century establishment are from the personal collection of Mrs. Arnold Nuechterlein, of Frankenmuth.

Tiffany Biergarten got its name and much of its charm from the sixteen Tiffany Chandeliers whose color and design sparkle against the background of an ornate gold ceiling. Aside from the chandeliers, the Tiffany Biergarten contained other unique and one of a kind stained glass window panels. 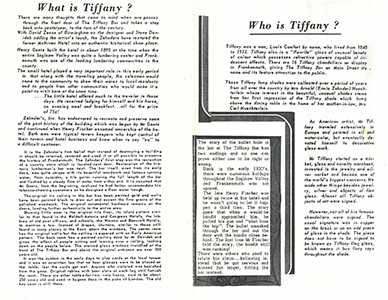 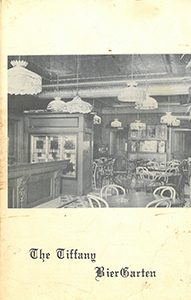 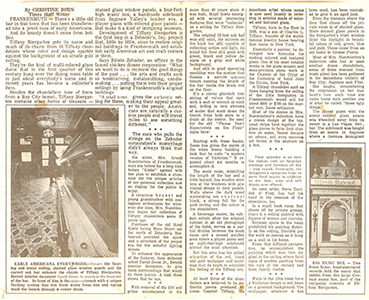 The bar also contains the original tile floor tile and a spitting trough below the bar. The famous running water floor cuspidor, a tiled gutter running the full length of the bar and flushed by a steady flow of water from either end, was designed by Mr. Goetz. This is one example of how Mr. Goetz was accommodating to his tobacco chewing customers.

Aside from the lamps and tile design, Tiffany’s displays other beautiful works of art. Stefan Davidek, a Flint native painted the mural on the ceiling in the back room of the Beirgarten. He wanted to portray people, mostly joyous naked women, looking down at the tables below. Davidek, studied at the Flint Institute of Arts, Cranbrook Academy, and the Art Students League in New York. The ceilings in the front two rooms are gilded with composition gold leaf, tin which Davidek described as sheets of gold, pounded out until paper thin. Frequently the tin embossed ceilings in these fine establishments were removed for scrap; luckily this never happened to this tavern. The original ceiling has since been repainted gold. 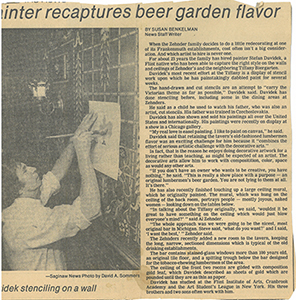 In 1988, Russ Baker purchased the business, installed food service and renamed it Tiffany’s.

In 1988, Russ Baker purchased the business, installed food service and renamed it Tiffany’s. The restaurant started off very simple with only five items on the menu. They were a hand tossed pizza, A Sicilian pizza, Sicilian slice, a burger, and a brat. He started with about ten employees working for him, only a fraction of the some sixty he has today. Patio dining became available two years later in 1990. It was important Baker that his food was authentic in taste. He made homemade sauces, dough, and pasta. It is still a value that has held high priority for 25 years. Today’s menu boasts dozens of lunch and dinner options, including Bakers original creation, the Pasta Pitza. These one of a kind dinners consist of a traditional style pizza, topped with one of many signature pasta dishes. Baker’s creation is one of many that keep customers satisfied and coming back. 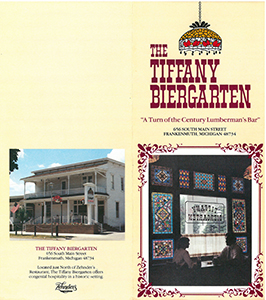 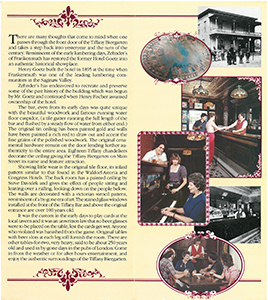 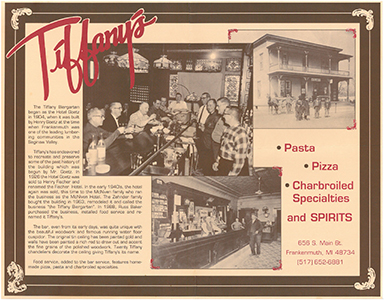